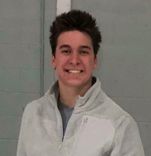 Brady is currently enrolled as a sophomore computer science and computer engineering major at the University of Louisville and is on his first co-op rotation here at GoodMaps. He was first introduced to coding during a software bootcamp that he attended during his senior year of high school. Within that bootcamp he learned Java, HTML/CSS, and JavaScript with jQuery. Since then, he has been introduced to C, C++, and Python through his collegiate career along with React within the first couple weeks of his time here at GoodMaps.

During his co-op, he not only hopes to meet new people and gain valuable knowledge directed towards coding and the software development process, but to also learn more about indoor mapping and navigation. In his free time, Brady enjoys doing things such as participating in about any recreational sport, working out, and playing video games. He also loves going to as many University of Louisville sporting events as he can!